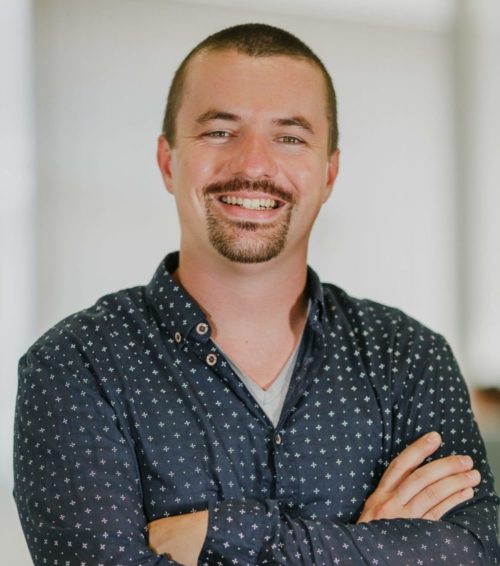 “The Best is Yet to Come” – Interview with Clement Jany, CTO

Clement Jany has been TiHive CTO since March 2020. An engineer by vocation, with a PhD in Microelectronics, Clement spent the bulk of his career as a researcher at the prestigious CEA, France’s Commission on Atomic Energy and Alternative Energies (Commissariat à l’énergie atomique et aux énergies alternatives). His experience is focused on the applications of semiconductors in the generation of electromagnetic waves, including Terahertz frequencies.

We sat down for shish kebabs and talked about learning, the outdoors, work and family. Clement is a charismatic speaker, and his intellect and sense of humour shone through the interview. Some questions have been edited, but I have done my best to preserve the feel of our conversation.

Salvador Silva: I will start with a simple question: what stoked your interest in the sciences?

Clement Jany: I think I take after my dad in the detail-orientation and in curiosity. My parents were not scientists, mind you. I come from a working middle-class background. But my parents always encouraged me to explore and I have enjoyed tinkering with and building things since I was little. My older brother also pursued the technologies, so it must be a family thing!

SS: And you must have been a pretty good student?

CJ: Yes, I happened to be quite good at school, but I wasn’t always a hard worker. When you’re young and smart you often think you can coast your way to good grades, but this mentality catches up with you. By ‘classe preparatoire‘ (preparatory grade before college), I started developing a work ethic that was more in line with my professional objectives, and I’ve kept it up ever since!

SS: After coming of age, you went to Engineering School in Paris. How did it shape your interests?

CJ: I’ve always dreamed to be not just any scientist, but a physicist. I also knew that I wanted to be at the vanguard of theory and research, and that I would need a PhD for that. My particular interest in the field of electromagnetics and Terahertz came naturally, because of my exposure to research and the Professors I had.

SS: Your interests then led to you being offered a research position at the CEA (Commission for Atomic Energy & Alternative Energies)?

CJ: Certainly! CEA produces very interesting research in wave physics. Nearing the end of my Masters, I applied to several positions, and was offered a choice between Paris and Grenoble. I love climbing, nature and the mountains, so naturally, I chose Grenoble! It was a six-month internship that blossomed into an almost ten-year stint as a researcher, during which I also got to complete my PhD.

SS: As a researcher, you also spent a year visiting at Stanford, not too long ago. That must have been academic Nirvana!

CJ: Yes, I had the chance to be there for one year in 2018 and it was an awesome experience. I had the chance to work closely with Dr. Amin Arbabian, a leading researcher in millimetre wave (mmW) semiconductor design for fast data transmission and healthcare applications. I learned a lot. Just to have the opportunity to walk down the halls of the physics department and seeing some of the greatest names in the field in the office plaques was quite inspiring!

SS: You said you moved to Grenoble for the mountains. Do you spend a lot of time outdoors?

CJ: Yes, most of my hobbies are centred around the mountains. In the warmer months I like to hike, climb, and do via ferrata. In the winter I love to ski. So, with the Alps nearby, there is always something to do!

SS: Via Ferrata, is that a road?

CJ: Via Ferrata is a type of climbing where the cables and some footholds are laid out in advance. It’s like a hiking trail, but for climbing. Grenoble is the only place in the world where a Via Ferrata route begins in the city – In fact, it is just five minutes away from our office!

SS: Let’s go back to discussing your professional path. Having been established at CEA for a while, what motivated you to move to TiHive? How did you learn about the company?

CJ: I knew Hani [Sherry, TiHive CEO] from the field because we had common research interests, and I’d read some of his publications. Because he was also based in Grenoble, we were also part of the same research ecosystem. Not long after Hani started TiHive, I met up with him to present some of my research which I thought might interest him. Next time I met him was a few months later, at a conference in San Francisco. It was then that he first floated the idea of me joining the company, as CTO. It wasn’t the first time I had been approached by a start-up to come onboard, but the opportunity excited me, and I felt confident enough about the technology and the team, so after a few days, I said yes!

SS: What about TiHive inspired you the most to join?

CJ: All of it is inspiring (laughs)! I don’t see my work at TiHive as a clock-punch at just another company. TiHive has a strong sense of purpose, with a clear impact mission for aiding researchers and helping manufacturers make better and more sustainable products. We are transforming research into action, and this is a huge motivator for me. Naturally, this is technically challenging, and as CTO I get to manage a cross-functional team, most of whom are in different fields from me, but this the kind of challenge I welcome. I learn more than I would otherwise, as a person and as a professional, and I truly feel that I am a part of something bigger.

SS: And since your March arrival, have you witnessed an evolution in the mindset of the company?

CJ: We are a lot more market-oriented now, which is key to delivering the value contained in our solutions. We have done a great job at defining users and use-cases, and prioritizing development goals accordingly.

SS: In addition to the professional accomplishments this entails, is there a personal achievement?

CJ: Yes. It’s not always easy to manage CTO responsibilities with those of a young family. I’m very lucky to have a wife who is very supportive of what I do at work. We have worked out a rhythm, helping achieve each other’s goals. I am grateful for this team dynamic.

SS: When you think of fields that Terahertz will disrupt over the next few ears, what comes to mind?

CJ: It’s important to understand that Terahertz in itself is not a disruption; it’s a physical property of nature. The disruptions will come in the way we harness this wave in new useful ways, and there, the possibilities are endless. Without getting into too much detail, I’ll give three examples. In manufacturing, Terahertz cameras can sense defects that regular cameras cannot, because they are often not visible under the naked eye. This means better products, but also less waste. This is TiHive’s main focus, today. In Telecommunications, THz can transmit data extremely fast, and major players claims it will be a key enabler for the future’s 6G network. In Healthcare, we anticipate that Terahertz will replace X-rays in many bio-imaging contexts, as it is both non-ionising and cheaper to operate. I think the world is about to be changed by these little waves!

SS: In TiHive’s case, why combine Terahertz and AI?

CJ: My enthusiasm with our approach at TiHive is that we’re making the Terahertz frequency band accessible by things that think! Our engagement is to make our THz sensor solution available for lots of different kinds of applications and easy to use no matter how complex the link between the environment we sense and the info the end-user sees is. Deep Learning capabilities make our software responsive to what the sensors capture, regardless of context.

SS: To conclude, tell me what excites you the most about the future

CJ: Today we’re at the bleeding edge of our field. While that’s exciting, nothing will match the feel of having our cameras reach industrialisation and become the new accepted standard. With that in mind, I would say that the best is yet to come!